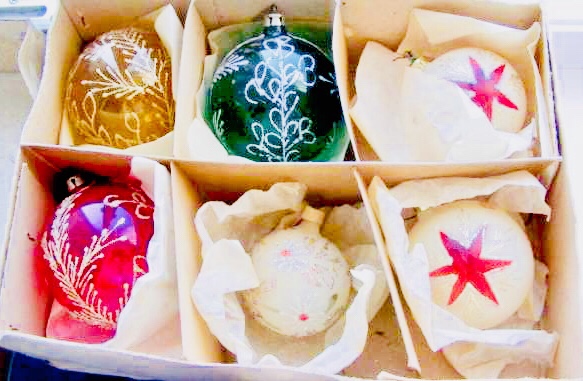 December was never truly her friend. When she was a child she thought that December was good. Was cold and dark but never treated her bad. She was looking forward every year for December to arrive with its festive mood and the green pine tree that smells like a wild forest and shiny wrapped little chocolates and most of all she loved the perfect silver or golden spheres she used to dress her beloved tree. She was particularly attentive with those delicate spheres because of their apparent fragility. They looked like we’re about to break at a more firm touch. So she was really careful to delicately place them in the little box they belong by wrapping each and one of them with paper to make sure will be safe until the arrival of the next December.

Also December had a lot of fascinating stories every evening projecting from an old and foggy projector. She could watch same sequence again and again and never be bored with the new unfolding universe full of mysteries and endless possibilities, fascinating characters with godly superpowers coming from unseen worlds.

However December had some dark sides and in some specific evenings was sending her some troublesome characters to disturb her peace. The characters were loud and agressive and she was scared to death sometimes hiding under the table to escape their imposing and threatening stature. She forgave December every time because she honestly believed that December is just playing out.

Time passing December became ruthless and started to act out. Every Year December grew darker and instead of peaceful warm stories his arrival coincided with gruesome characters and happenings that she couldn’t make sense of. And she couldn’t hide under the table anymore. She had to face December and the disturbing new faces he was showing now. So she did. December never got better. She wanted to trick December in some years by trying to avoid him, yet every time he got her. And of course even more angry because of her tricks.

She Is still waiting for good old December back. But this year again December is here and he doesn’t make any prerogative. Is brutal and has some god damn scary stories. Never December looked so gloomy. She cannot get used to this dark December and she can’t avoid it either. So she is waiting for him to leave so she can be in peace until next time will arrive.

“Dreaming of a white Christmas just like the ones I used to know.”

”All the anxiety we bear with us, all our thwarted dreams, the incomprehensible cruelty, our fear of extinction, the painful insight into our earthly condition, have slowly eroded our hope of an other-wordly salvation. The howl of our faith and doubt against the darkness and silence, is one of the most awful proofs of our abandonment and our terrified, unuttered knowledge.“ Persona (1966), dir. Ingmar Bergman View all posts by leirenerousseau

Hello gorge! Welcome to my page!
LeIreneeRousseau is channelling my (a)typical blonde alter ego . As a chronic procrastinator i started this blog ages ago. In practice, i only started little than three years ago (!) trying to document impressions and photos of a trip. If you know me at all, you know that i am fairly opinionated – and i am not shy of speaking out – as i have been told. So, naturally, my blog shifted to a page where i talk a lot about myself (and with myself) and my opinions might offend yours.
You’re welcome. From blonde to yours.